Far before the development of gemmology as a science, all red gems were called Ruby. Interestingly the Moghuls of India were able to distinguish the nearly identical ruby (red corundum) and red spinel well before then. This was important as the Spinel was the most prized gem at the time and far more valuable than the red corundum we call ruby today.

Ruby and Spinel are very similar in appearance – they grow under the same conditions and locations, get their red colour from the same element (chromium) and they both fluoresce. So how did they know the difference way back then?

There are three “tells” an experienced gem trader uses to distinguish the two gems: their rough crystal shape, the gems shine (lustre), and colour.

Tell 1: Ruby and Spinel have different crystal structures: it is easy to distinguish fully formed rough crystals – the ruby forms a hexagonal crystal, the spinel forms as an octahedron (a double-sided pyramid).

Tell 2: Ruby is harder and will take a better polish. Even broken or worn red pebbles of ruby will be slightly shinier than the duller spinel. This is most likely why the large spinel were tumble polished in their original shape rather than faceted.

Tell 3: Even a cut gem has a tell! A ruby is pleochroic – this means that depending on the angle it may show a purplish-red or an orangish-red color. Spinel on the other hand is not pleochroic and will show the same colour viewed in all directions. In some cases holding a gem up to a bright light (the sun) and turning it around in all directions is enough to reveal the pleochroic colours of a gem. In other cases, a simple polarizing filter can help spot the difference. Find out more about pleochroism from the GIA.

Interestingly Spinels were mistranslated into English as rubies and it wasn’t until the arrival of gemmological equipment that western cultures learned that their crimson red crown jewels weren’t rubies but spinel!

Fun fact: Not all spinel is red – it comes in a wide variety of colours.

At DesignYard you will find a delightful selection of spinel jewellery. Have a look at Sophia Epp’s casual classics with red and black spinel, or lose yourself in this stunning 5ct grey spinel ring by Ronan Campbell.

Fun fact: Ruby is the perfect gift for July babies, a 40th wedding anniversary, or a 50th birthdays

We also offer a wide selection of Ruby jewellery – have a look at Josephine Bergsoe’s edgy jewellery or dream away with Da Capo’s out-of-this-world high art jewellery rings.

Spinel remains a fairly obscure gem in western culture and you’re unlikely to find it at your high street jeweller – it is mostly a collectors gem. If you’re in the market for a cool €100K, you should have a look at these two spectacular designs 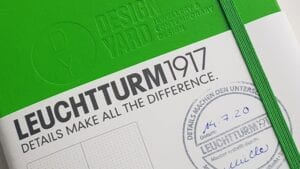 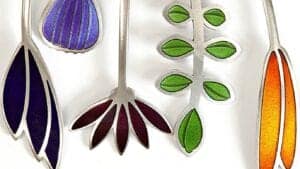 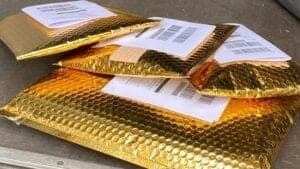 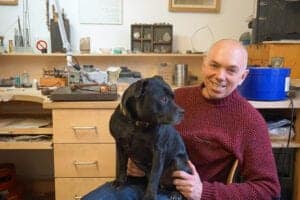 7th July 2020
We first met Mark Nuell at Goldsmith’s Fair in 2018. Instantly attracted to his work, we were delighted when he agreed to show some of... Continue reading